Selecting the right surface for your driveway can be a tedious task one often chooses to overlook.

It may sound like a simple question, but it’s a question many homeowners in Dublin often do not know the correct answer to. Despite driveways being a necessity, many people don’t know much about them, such as what factors to consider before installing a new driveway or which materials are right for your driveway. However, it most definitely is a very important task as the right driveway sets the tone for your house and its overall outward appearance.

There are so many building materials that can be used (gravel, concrete, asphalt, brick, tarmac to name just a few), and with contractors offering all sorts of options, one can easily get confused. If you are looking for a driveway installation in Dublin, the most important aspect to look at would be the material. A tarmac driveway is a very practical choice if you want a shorter downtime, an affordable option, and to add a great exterior appeal to your property.

‘Tarmac’ is a term that has been used to refer to the many types of bitumen and stone combinations available for creating roadways and driveways. For this reason, you will often see people referring to tar, tarmacadam, macadam, bitmac, or asphalt as these terms describe the same material and people are all usually referring to the same general thing.

Some semantics (and not cementics :)): This word “tarmacadam” has come from the mixture of tar (The material used for the job), and macadam, which was derived from the last name of road construction inventor and pioneer, John Loudon McAdam.

“In 1902, Edgar Hooley patented the process of heating tar, adding slag to the mix and then breaking stones within the mixture to form a smooth road surface.” – BBC.co.uk [1]. Tarmac is basically a kind of building material made out of tar and crushed stones and is extremely useful in the construction of driveways. It can be applied directly on any other type of existing surface, including existing tarmac drive, pre-existing driveway.

Tarmacadam (Tarmac) is a very bituminous, dark material that requires to be placed as a boiling liquid and then leveled & compacted to procedure the right gradient and shape for the driveway.

Within one or two hours, it has to be allowed to cool down, during which time its particles will bind and form a hard-wearing, solid tarmac surface.

The differences in Tarmac and Asphalt mixes available on the market is quite a technical one and an experienced contractor will choose which is best for your driveway depending on usage, traffic loading and aesthetics required.

Opting for a tarmac driveway not only saves you a lot of time but also money, especially in the long run. For one, tarmac is one of the most affordable driveway materials available to this day. Also, since installing it is not overly complicated, labour fees are generally less expensive than some more difficult to install paving types.

Benefits of laying a tarmac driveway

It might not be the most elegant or attractive-looking choice, but there are several aids to laying tarmacadam driveways. So, let’s now know about the benefits below…

A specialized driveway contractor will combine the tarmacadam at a high temp in an appropriate paving machine. Usually, the professionals complete the job within a matter of hours only. This means less disturbance for you as well as any other path or road users.

Different from paved or concrete driveways, tarmac is generally laid straight onto any existing surface, while the other resources need a full depth bedding layer before starting the job. Although in case you possess a lawn, you need to remove it beforehand.

No matter whether shine or rain comes; your tarmac driveway will still be looking as attractive as new for several years!

Tarmac is hardy against any substantial water damage that may cause your front lawn to overflow which will need a long clean-up work afterward.

Tarmac is mainly hardy to the mass of weighty vehicles or the traffic flow which causes breaks or crack in concrete and paving.

Easy To Power With Other Ingredients:

Stone or brickwork or clay tiles for an attractive and neat finish to the driveway.

You can quickly repair any dents or scratches all by yourself or with the help of an expert with accurate polish, and in case your driveway asuffers widely, you can increase a new tarmac layer straight onto the existing one. This will save you the concern of diggings costs!

How Much Does It Cost To Tarmac a Driveway In Ireland? 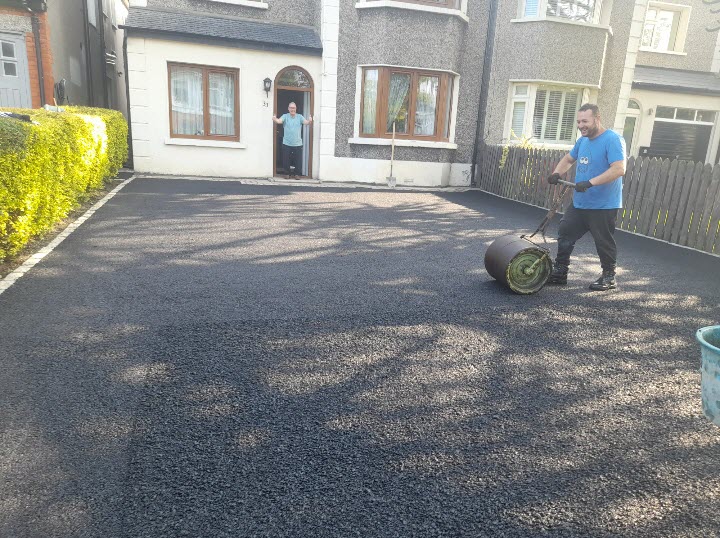 For your tarmac driveway project in Ireland, it will cost you roughly €45 – €80 per square meter. Or if you prefer, a global usual cost of the tarmac driveway in Ireland is about €3000, but the maximum of driveways in Ireland ranges between €2500 to €5000. Nevertheless, this cost might decrease or increase depending on one’s necessities.

This includes the supply of tarmac, labour, machinery and tools, and skip hire charges are also included. The final cost can vary depending on the size of your driveway, preparation required, existing levels, drainage required and access. Additional factors, such as any landscaping features you want to add, paving, benches, walls, kerbing will determine the overall final cost.

By comparison, tarmac driveways are one of the cheaper option especially in the long run. They are a little more expensive than gravel and less expensive than other paving types such as cobblelock or natural stone, generally speaking. Tarmac is still considered one of the most durable and hard-wearing options for building a driveway.

A professionally installed tarmac driveway can last you for years and survive all types of weather conditions. Thus tarmac driveways really show their value over time as they require little to no maintenance and thus no ongoing costs, once installed correctly initially.

If you hire contractors who don’t personally own the equipment, then the equipment-rental cost will be added as an added expense – something which makes approximately €80-€90 per day. A waste skip hire will cost €50-€100 per weekend, and a mini digger (requirement depends on the existing condition of your driveway) will cost €70-80 per day.

Initially, being an oil-based product, global oil values have an effect and this drops down to the little businesses that have to purchase tar (which is the gluey black part used as a binder).

Furthermore, the price will be obstructed by whether the servicer you pick is adequately experienced and qualified or not.

In case you want quality as well as an experience then obviously, you will have to pay more.

But in case you want something cheap then you will get what you have paid for.

Lastly, an edge (of the existing driveway) will charge a lot below a wholly new tarmac driveway.

Any contractors offering tarmac driveways in Dublin will ask for the size of the driveway to estimate the time required for the job. Since Tarmac is quite an fast material to work with, the time span can range anywhere from a day to a week depending on the length of the driveway. Just as with the cost, many of the same factors will affect the time frame for completion of works on your driveway. The existing ground, preparation required, drainage, existing levels, and additional features such as kerbing, benches or paths will all have an effect on the duration of works. Weather also plays a role in the time taken to complete the job. Rain or snow can slow down the process and escalate the time taken.

Extra charges also factor into the total cost of a tarmac driveway. If you hire a professional contractor, they already own the required equipment needed to tarmac the driveway, which saves a lot of the overall hiring cost as it will already be factored into the original quote provided.

But the time will vary depending on several factors. So, let’s now know in detail about these factors below…

In case there are any shrubs, trees, or tree roots, then this will make the job way more problematic, so it’ll take extra time to complete.

The total time required to dig an area and lay the tarmac driveway relies typically on the size, shape, of the drainage, driveway, and edging.

Another significant issue is the total number of workers involved in the mission. In case only 1 person is working, the time will double.

Generally, a 30 square meter (m2) four-sided driveway must take just a couple of days or so.

In the initial 2 days, the servicer will work on

And on the 3rd day, on tarmacking to complete the job.

Rainy and snow weather can similarly affect the total time required, as it will make it problematic for servicers to lay the tarmac, particularly when it’s pouring.

Is a Tarmac Drive Cheaper than Block Paving? 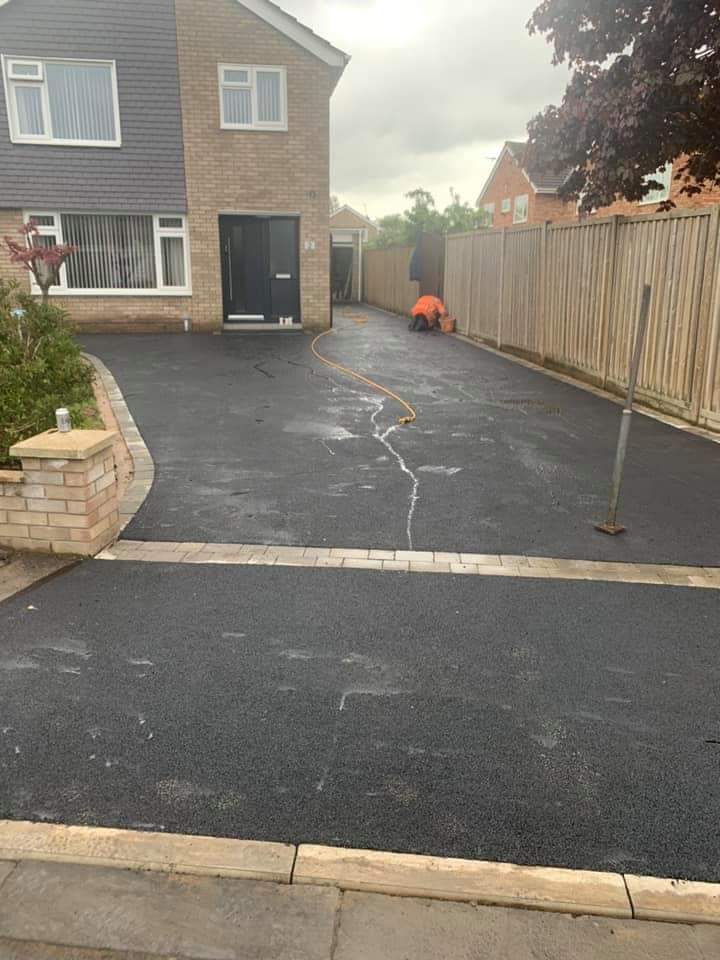 The blocks required for block paving are not only very expensive but block paving is also quite labour-intensive (E.g. you need to lay concrete sand edging etc.). A square metre of typical block pavers is more expensive than the equivalent area of Tarmac.

With block paving, it is really important to have a level base to lay the blocks, a process that takes time to prepare. It will then take more time to lay the individual blocks and make sure each of them is levelled properly, especially if you are going for a more complicated or intricate pattern.

There are multiple options available for block paving, all of which are priced differently; however, even the lowest-priced block is more expensive in comparison to tarmac per square meter.

Is Tarmac Cheaper Than Gravel Driveway Cost in Ireland? 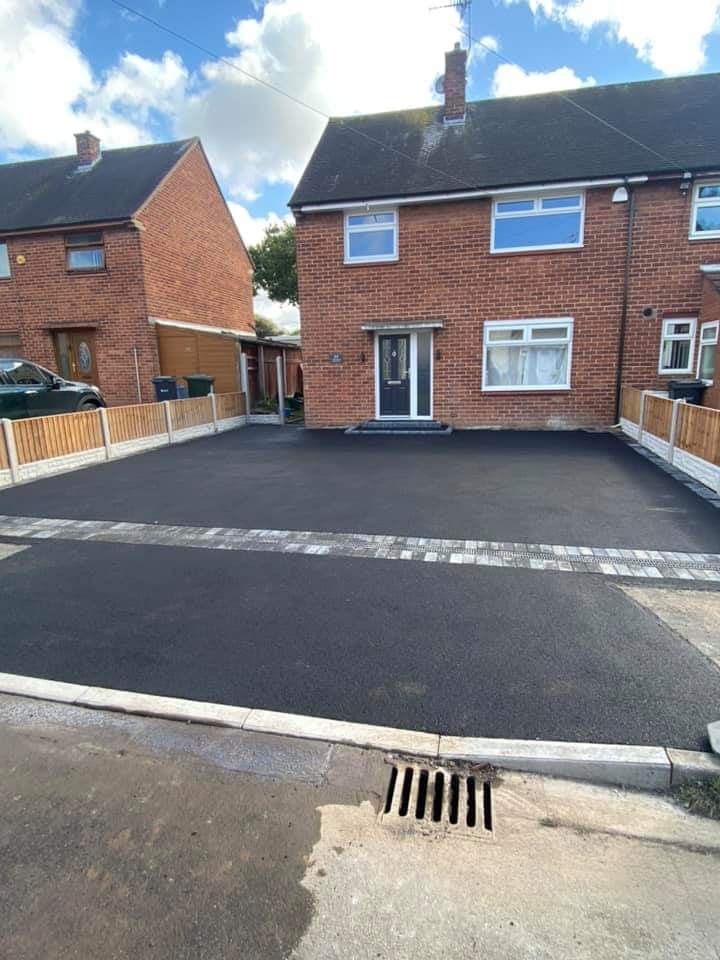 Gravel is cheaper than tarmac; however, Tarmac is definitely a more durable option. Installing a gravel driveway may cost you less initially, but it may require a little more upkeep to keep it looking pristine. Leaves and debris could cause weeds if not kept under control whereas with a tarmac driveway the maintenance required is a lot less as it’s a smooth solid surface less liable to weed and dirt retention.

While gravel can be cheaper, it does tend to shift and change over time and will need topping up in order to look as pristine as it did in the beginning. Gravel doesn’t set in place like tarmac does, so it may need raking now and again to rectify displacement.

In general, tarmac and gravel might be of a similar cost to install, but tarmac is easier to maintain. Often, the final choice might have to do with the property’s overall setting. For example, tarmac, concrete driveways and block-paved drives are very popular in urban Dublin, while gravel is quite popular in rural locations with large driveways. Both gravel and tarmac are also commonly combined. For example for a large rural driveway we often install a long tarmac avenue followed by a gravel area as you approach the house to create an entrance area. Keeping your budget and taste in mind is key when choosing your driveway materials.

Tarmac driveways last for years with or without much care. Tarmac, as soon as used appropriately, is an exceptional choice for your driveway because of its coarse surface which permits easy access. The dark color of the Tarmac doesn’t bring to light dirt rather it hides small oil leakages.

Tarmac appears great as soon as used with the granite as a contrast brings out the finest in both ingredients. It is costlier than gravel driveway and many other options but it lasts longer.

This makes the Tarmac driveways the right driveway designs for you that will be worth your money!

Q. How much is tarmac per sqm?

Q. How much does it cost to replace a tarmac driveway?

A. The cost to change the Tarmac driveway varies between €140 to €450 per square metre (m2). This choice is inexpensive than the installation of a brand-new Tarmac driveway.

Q. What is the cost of one ton of tarmac?

SEND US A MESSAGE